By posting my net worth on a payday!
I just got really depressed looking at the last year of net worths on my Mint. I just realized that what I was looking at was actually my change in debt, and therefore is slightly less depressing, but it could always be better.
It’s a little hard to see on the bar chart, but I’m giving it anyway. Maybe I’m just not a “visual learner”: 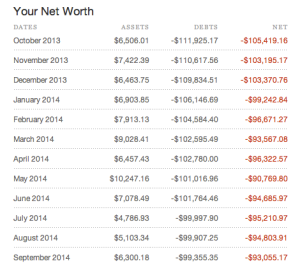 So in the last year, my net worth has gone up an average of about $1,000 a month. Now that’s nothing to sneeze at, I guess, but is it really going to take me another 8 years to get above 0? Sweet lord, that would be terrible. And I know I’m going to spend a crap-ton on the wedding. It’s really disheartening when you consider that I’ve made good money for the last 8 months, and I feel like I have little to show for it. I have to remind myself that (1) we bought a house that we put about $10,000 down on, and have had many associated new house/moving expenses, and we really think it’s worth more than what we paid, (2) I have a 401(k), with a vested balance of $5,000 (this is actually really not a lot of money at all, considering my age, but it is something. When we become a two income household I plan on stepping this up, and I’m hoping raises and bonuses will assist too), and (3) we’ve got another $1,000 in our “house” account, because we’re saving the money we collect in rent. So I’m definitely not in too bad of shape. $12,000 in twelve months doesn’t seem like a good net worth job, but $28,000 seems decent. I’m really glad that I’ve had the better paying (same) main job over the last 8 months, because I’m really going to miss the extra monthly paycheck at this time next year.
One bright spot: the greatest change in my net worth in the last year was from April to May. I realized that this is because May is a three paycheck month for what is now my only job (really, May was a four paycheck month when I had the second job). And that magical three paycheck thing happens twice a year, the next time being next month. Woohoo!

*(that close parentheses and the colon made a frowny face)