A couple of months ago, I posted about ways in which I could cut some of my costs.  I wanted to give a recap:

We’re now paying $886 a year for car insurance.  I had been paying $790 a year–for just me.  And my hubby had more coverage than me.  So my portion will be about $30 a month less than what I had been paying.  I’ll need to set some money aside because we’ll be paying in 6 month chunks, but for the first couple months it will only be a bit more than I had been putting away monthly.

I switched to Ting and have paid one bill so far.  I definitely need to work on not using data by checking facebook during the workday, and googling random things on my train rides.  I have started playing sudoku and bringing my kindle instead, which will hopefully help. The takeaway is that my bill last month was $49 instead of $98.  I’m guessing it might be up to $60 this month due to data use, but again, I’m optimistic I can routinely  get to $45 a month.

The only bad news–my phone has been acting up, and I may be in need of a new one soon.  This might mean going back to a contract, and going on a joint Verizon plan with hubby–since he is adamant about not leaving them (full disclosure:  I love them too, but they’re plans aren’t great for one person).  So while I’ll still be saving over Sprint, I might be paying a bit more per month.

Shortly after I posted, I got a mailing informing me I can upgrade my Capital One card to a Quiksilver card–keeping my card number and the age of the account, but losing the annual fee.  That was surprisingly easy!

Still waiting for my taxes to be cheaper–I think that will update in July, but I could be wrong on that.  In other news, I’m down to just the one last  undergraduate loan, and I think it will be gone in July or at the latest early August. Either way, I’ll be down to just law school loans in time for my birthday.

My current bill is $44.68!  That’s about half of what my last Sprint bill was, for the exact same service (just trying to be conservative with my data usage).  I used XL+ data (just over 2000 MB), which accounted for $30 and change of my bill.  But I’m hoping that I’ll be able to work on using less and less of my data (ensuring I’m on WiFi whenever possible, hopefully bringing my Kindle in with me so I’m not randomly surfing the internet during my train ride), so that I can hopefully get this down to $19 a month on data.  I also used over 100 text messages this month, by talking to a friend I’m not usually in touch with, so I don’t expect to go over the smallest allocation next month.  Though I think that’s only a $2 difference.

Either way, I’m really happy with my decision to change to Ting so far!

Again, I’ve got an estimated net worth here.  I think I might be being extra-conservative with the estimate, but I’m okay with that.  The honeymoon money is almost spent/moved to another account, so that’s good.  I’ve started to get a little overwhelmed with all things wedding, and realizing the expenses that we’ve yet-to-incur, and what they may be.  I was looking into getting a string quartet/some kind of classical string performance for the ceremony, but I just can’t justify spending $800 on an hour.  iPod Tchaikovsky it is!  At some point I’m going to have to do a few posts about what we’re spending on the wedding, and what we’re prioritizing (and what we’re just plain unwilling to spend money on).

Thought #1 is… YAY! This is 30% of the way there, with 25% of the year behind us!  The bad news is, my tax return and my bonus have already happened, so I won’t have these kinds of windfalls for the rest of the year.  But I’ll keep plugging either way, and for now, I’ll be happy about the progress.

I saw another blogger’s post on the monthly interest they’ve paid (who was this?  I would like to give you a shout out!)  Here’s a little bit of a view of mine.  I think in 2013 I was still paying some old accrued interest, but really started paying aggressively around that time, so after that I was just paying the interest that accrued monthly.  It’s not terribly easy to see, but there was a significant drop in October (paying only a partial month’s interest), that’s stabilized right around $380.  Other than monthly variation (months with 31 days, months where the payment date falls on a weekend, so the payment doesn’t go through until Monday) this number should slowly go down every month.  I’ve been guesstimating the interest for my undergraduate loans, but they’re around $10 a month at this point.  My numbers should be pretty exact once the last one is paid off in August (and it WILL be paid off by my 32nd birthday). I’m hoping to see serious changes here once the man in working.  For various reasons (co-signer, low balances, multiple loans, the fact that I’ve had them for TEN YEARS) I’ve been paying off my undergraduate loans first, even though they have the smallest interest rate (3.25).  Starting in August, my extra payments will be going toward my highest interest rate loans (5%).  The difference between the two isn’t huge, but I’ll take it!

Now for the main event:  My puzzle of total(ish) student loan progress!  My current loan balance is: 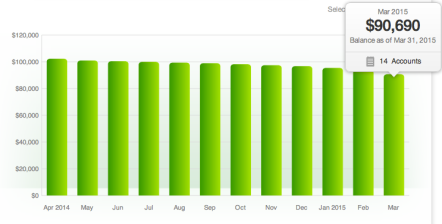 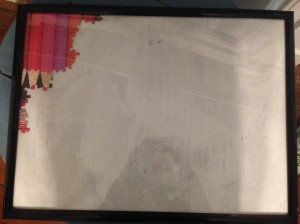